In 2018, we talked about a sequel of the Palladian Odyssey, but I thought this would not happen during the next two years. Therefor the offer for a tour in Umbria in 2019 was a pleasant surprise. Apart from a perfect organized journey (thanks to Mike) and the stunning workshops (thanks to Liz) I was going to meet some friends from the year before. Something I was really looking forward. The first meeting in Florence was like the beginning of a family gathering.

Many years ago, I was in New Hampshire und noticed: "We flew over 6000 kilometres just to drive through a landscape that looks like Salzburg." Exactly that came to my mind when arriving in Umbria for the first time. (Of course, there are in both New Hampshire and Umbria many places, that absolutely do not look like an Austrian mountain landscape but there are some similarities at the first glance.) The tourists have not discover this part of Italy (up to now). Maybe because even a little walk can be arduous. In principle, one goes steeply uphill, so that one can go steeply downhill. I have no idea how people move around if there is clear ice – probably with pickaxes and crampons.

Although I sketched more than last year, it was less exhausting. We stayed the whole week in the same hotel in Montone. A small town as if from an Italian postcard idyll: winding alleys, stone houses with tiled roofs, olive trees.

The perfect sketching place if May 2019 had not been one of the coldest and wettest in decades. We used every little sunbeam. It was brilliant how Liz offered them maximum "teaching" despite adverse circumstances. That was not easy. Light, shadows, and tonal values were essential parts of the workshops. When everything failed, Mike always provided a warm, dry place where we were wonderfully fed. I have decimated this year’s Umbrian truffle stock sustainably.

Last time I experienced my sense of achievement during the course, this time I was able to implement some concepts only afterwards. I became desperate with "watercolour first", as on can see at the basilica of Assisi. I really tried to master is. One would be so much faster if one starts with the colour. After some attempts, I figured out, I am a "watercolour last sketcher". 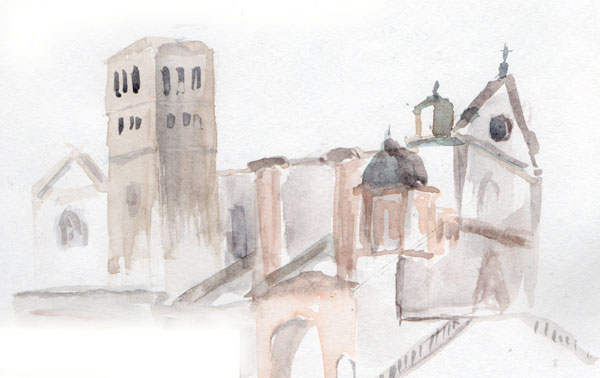 The frescos in the Basilica of Saint Francis of Assisi are overwhelming. Since Francis was the founder of the nativity movement and is still the patron saint of the nativity scene builders, I expected a lot of Assisi, in that respect. However, I was disappointed. Instead of shopping, I had to sketch the beautiful street lantern. 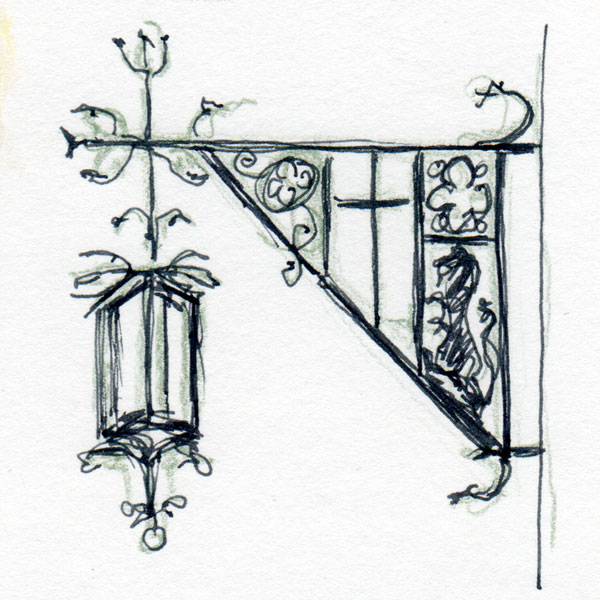 I was very excited about landscape sketching. Something I had no experience in. Despite being driven away, either by the icy wind or the next rain I managed to make my biggest sketch so far. It covers two pages of a Stilman & Birn sketchbook (20,3 x 25,4 cm). 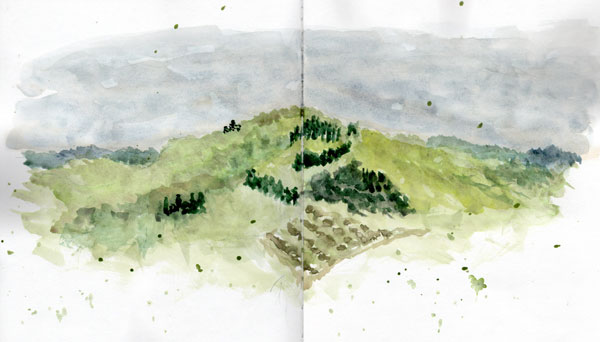 The other landscapes became small again. 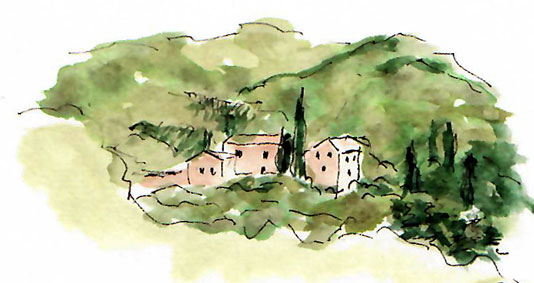 Beside size, I also varied my tools. After nearly a year, I used a fine liner again and of course the Sailor Fude. 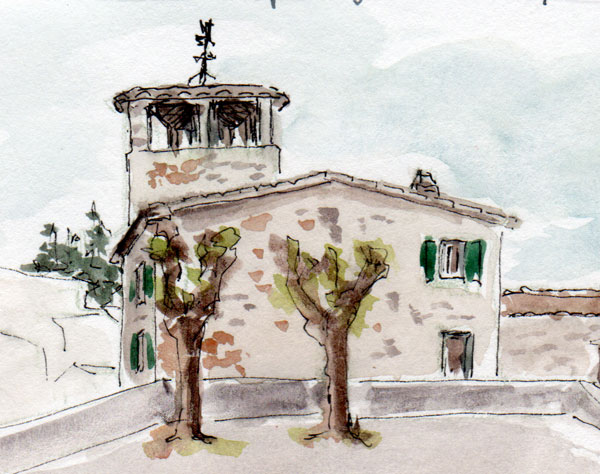 My favourite sketch shows the roofs of Montone. I always wanted to sketch something like that and while doing so I got the impression I could put much of what I had learned into practice especially applying the darks first.

The second Palladian Odysee was over way too fast again. It is unbelievable how much Liz teaches one. She constantly gives you the feeling that she is only there for you, but at the same time takes care of everyone else. And we had a lot of fun, too. I got so used spending a week with some of the participants that I hardly know how to plan my next year holiday without them.