Florence With a View And An (Indecent) Offer

For a city like Florence, this will be a short post. In 2012, I visited the town for a rather extensive sightseeing trip. This year I have only stayed for two days, because it was the starting point for the Palladian Odyssey 2019 – Umbria.
As comfortable as the night train connections from Vienna to Italy are, as horrible are the sleeping cabins, which the Austrian Federal Railways dares to label "Deluxe".
Leaving the train at 6:45 am looking at the scary weather forecast I asked myself why I arrived two days earlier. As soon as I had taken my first steps in Florence, I remembered. Wherever you go, you walk under the eyes of geniuses. Literature, art, science, architecture and economy experienced their "renaissance" here. In this place, many great spirits have laid the foundations of the modern age and one constantly discovers the traces they have left behind.

Unfortunately, the weather became more and more unfriendly but gave me time for two sketches. To get a whole view of the Ponte Vecchio I had to position myself on the middle of the Ponte delle Grazie. Not a comfortable place for someone with acrophobia.

Santa Croce was the only monument I visited again, because I remembered it as very impressing. Under no circumstances, I wanted to spend hours for the sketch as I did last year with the Duomo in Milan. While making this very loose sketch with a recently bought Sailor Fude. (In this post, you can read more about the Fude de Mannen by Sailor Pen.) I discovered how little I liked the coloured façade compared with the clarity of the brown walls of the rest of the church. The tombs were also more impressive last time. Only the cenotaph for Dante stunned me again. The poet’s grave is in Ravenna and all attempts by the Florentines to get hold of his mortal remains have failed. However, this is not revealed to the visitors of Santa Croce. I suppose the Florentines agreed to pretend that the most famous son of the city is buried here. 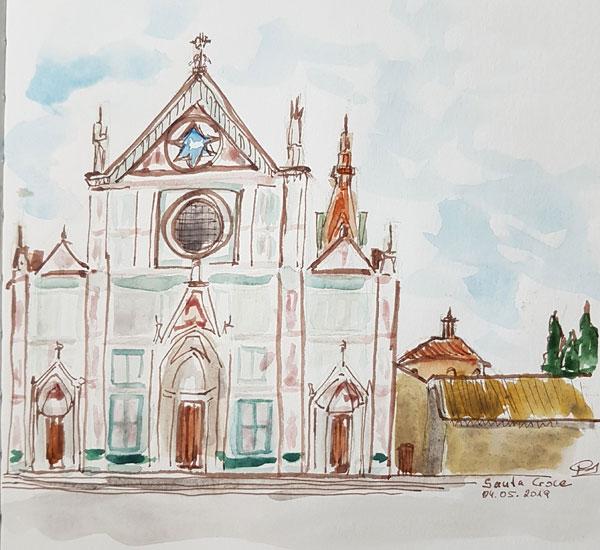 In the late afternoon, I sought a big adventure: a ride with the public bus. Italian traffic is notorious but bus riding in Florence is a riddle wrapped in a mystery inside an enigma. I just wanted to go up to Piazzale Michelangelo, from where one supposedly enjoys a beautiful view. I was told to take bus #12 departing from the train station, which would bring me there in about 35 minutes. Perhaps it would have succeeded had it not been for an art installation on one of the main traffic arteries, which moved at a walking pace. The journey has lasted for 75 minutes, but the breathtaking view was worth it. Back to the station, it was another 45 minutes on a completely different route. Surely, the longest trip for a photo I have ever token.

The next morning belied all weather forecasts with a blue sky and bright sunshine, at least for one and a half hour. Behind the sober main portal of San Lorenzo (The church has never gotten a decorative façade.), one would suspect a small church and not a former cathedral. Initially I planned a sketch including the nave and parts of the Medici Chapels. I had to leave the ideal spot for this work very fast after discovering at the risk of my life that a traffic sign, which indicates that it is forbidden to use this street, is no reason for a Florentine driver not to drive there. After starting at a securer place, something extremely crazy happened. A young, good-looking, Anglo-American man, who had enjoyed some consciousness dulling substances during the last night, asked very politely if he could watch. I agreed. Suddenly he lay down on the floor in front of me and made me still very polite an offer (including the F-word). I was offered water and cookies while sketching before but never anything like that. Meanwhile a couple had arrived who apparently belonged to the young man. I asked them to take him with them, before he could get seriously hurt. 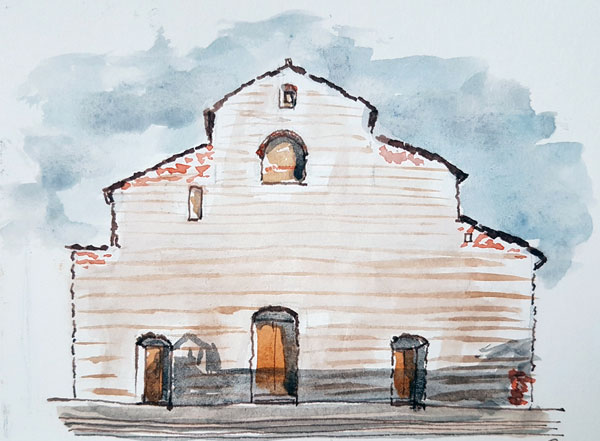 Then came the rain spawning the street vendors. I had already noticed them strangely in Milan last year. In Florence, they are downright bizarre. Although I was obviously wrapped in a wind- and waterproof outdoor jacket, which had withstood the Antarctic weather, they permanently wanted to sell me umbrellas and/or raincoats after all. It would have been better if they had offered caps, scarves and gloves. It was getting noticeably colder.
While visiting the wonderful church and cloister Santa Maria Novella I made a quick sketch under the arcades again with the Sailor Fude. Not even in winter in the Arctic did I freeze as much as this afternoon in the centre of Florence. Only an overpriced excellent hot chocolate from the Café Rivoire at the Piazza della Signoria could help me. 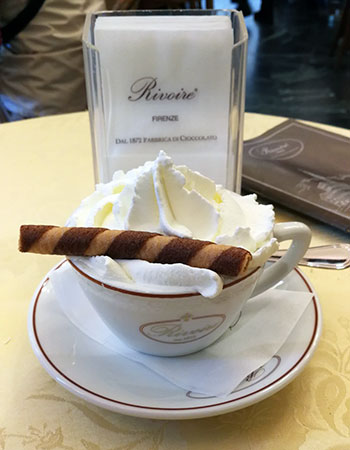 The farewell from Brunelleschi, Donatello, Dante, Michelangelo, da Vinci, Cellini, Machiavelli, Galileo and all the others made me nostalgic. In their honour, I bought a special sketching tool. Maybe a little genius will rub off on me.