On my way to the Palladian Odyssey 2018 I made a stop in Milan. I have never been to Milan or Padua before, therefor I didn’t know in the beginning which town I should visit. All the people I asked were very helpful. 50 percent voted for Padua the other 50 percent voted for Milan. In the end Milan won only because the train would stop in Padua at 5 a.m.!

I wanted to use a least half a day of my two and a half day stay for sketching. Surprisingly I had seen all the required places by the late afternoon of the first day. I stood in front of the Milan Cathedral (25 € to go inside without queueing was definitely too expensive. In Venice this costs only 2 €.), walked through the Galleria Vittorio Emanuele, visited the museum of the Scala, crossed the Castello from one end to the other (The Sforzas must have been very fearful.), found myself suddenly opposite the Piccolo Teatro Strehler and drove to the lively Navigli quarter. Before I visited an unimpressive multimedia exhibition about live and work of Leonardo da Vinci (Another point in which Venice is more preferable.) I pulled out my brush. Nearly everybody connects Milan with the cathedral. Probably because of my enthusiasm for operas in my youth to me Milan has always been a synonym for the Teatro della Scala. The building is so unimposing, I nearly passed by it. Nevertheless it was a very important sketch for me. 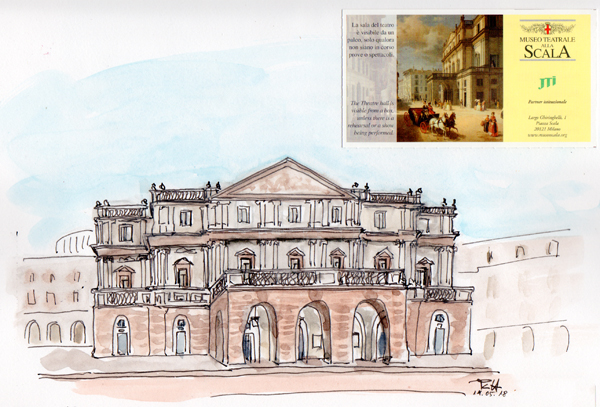 On the next morning I accepted the inevitable: the face of the Milan cathedral. As I leaned in Liz Steel’s online course "Buildings" it’s helpful to look for squares. I looked, but I didn’t find any. This sketch took me two and a half hour. While sitting on the steps of the Vittorio Emanuel monument a charming Hungarian tourist provided me with water and home-baked cookies. She also supported me in my fight against the birds. Every dove which was banished from Saint Marcus square and Trafalgar square found a new home in Milan! 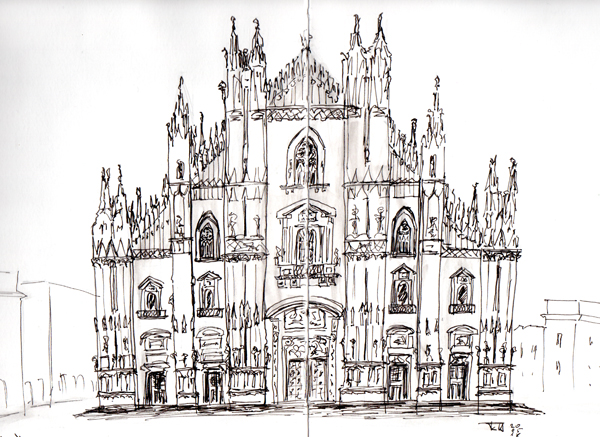 In the evening it was raining cats and dogs. When in Milan the rain starts the people who try to sell you identically patterned silk scarf every 20th meter are replaced by people who want to sell you umbrellas and raincoats. These venders confront you with the pitiless truth. Facing dark grey clouds and water masses I told a seller, that I wouldn’t need an umbrella and he replied: "But it is raining." I seem to make an extremely unintelligent impact on my fellow men, or at least on those who sell umbrellas.

Even if it’s raining one can sketch in Italy. There is always an arcade around, like opposite the Galleria Vittorio Emanuele. After I had positioned my stool and opened my sketchbook I discovered that in contrary to me my me fountain pen, watercolour pencils, and brushes wouldn’t become wet, because the stood on the desk in my hotel room. I only had a black fineliner in my bag.  In contrast to the cathedral I found a square immediately. This was my staring point from where I was working in both directions. I am a really proud of this sketch, which I did with no setup at all. For me this is very courageous. Like the sketch before I wanted to add colour but when I finished I found the lines expressive enough. 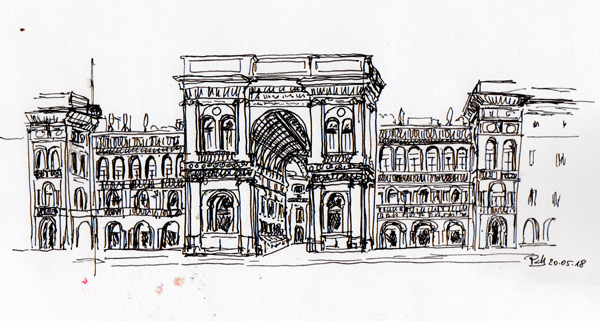 "That’s it?" I hear all the enthusiastic visitors of Milan ask me. Yeah, the town didn’t inspire me to anything more. Milan’s charm and flair – if they exist – made no impression on me. Compared with other Italian cities there weren’t that many visitors, nevertheless the town seemed "touristy". No comfortable place where one would want to stay. If I made it to a Café I was shocked by the exorbitant prices and the waiters who act as if I detain them from getting out even more money for a simple Aperol Spritz of someone else. The car drivers were friendly, the stopped for every pedestrian – not at all a matter of course in Italy. Nevertheless next time I will go to Padua.