Apart from travelling to the penguins I fulfilled myself another dream this year: a sketching tour. Initially I wanted to go to Venice. I found a German travel operator for an urban sketching course there but the price-performance ratio was unattractive. In autumn 2017 I started my first online course with Liz Steel. Being sceptical about this sort of "class" I became enthusiastic after the first part in such a way that I booked two further courses. To my delight Liz holds a workshop lasting several days in Italy at least once a year. The so called Palladian Odyssey brings you to some of the most beautiful places in the Veneto and provides an all-inclusive service, i. e. you needn’t care for anything except the sketching. While Liz was teaching Mike took care for the whole organization. Together they are unbeatable because everything was perfect during the following week.

After a mediocre trip to Milan I met my fellow travellers in a hotel in Vicenza. We were 12 people from 9 different nations driving in a small bus through Northern Italy spending nearly the whole time from breakfast to dinner together. These are the best options for all kinds of sociocultural catastrophes. As someone who avoids group events in general and group travels in particular I had some concerns. As a matter of fact it turned out as one of my most enjoyable and most beautiful trips ever, surrounded only by nice, interesting, cultivated, funny and polyvalent people.

Reading the itinerary I imaged myself sitting in an idyllic landscape sketching neat villas. That happened, but sketching turned out to be hard work. At least two workshops a day with at least one sketch to present under real travel conditions. Rain or sun, knee-high grass on the embankment or irritating buskers, Liz let us sketch – and we had so much fun and learnt a lot! It was wonderful.

At the beginning we took it rather easy at Ca' Marcello. The first sketch was drawn by eye which was much easier than the second task. 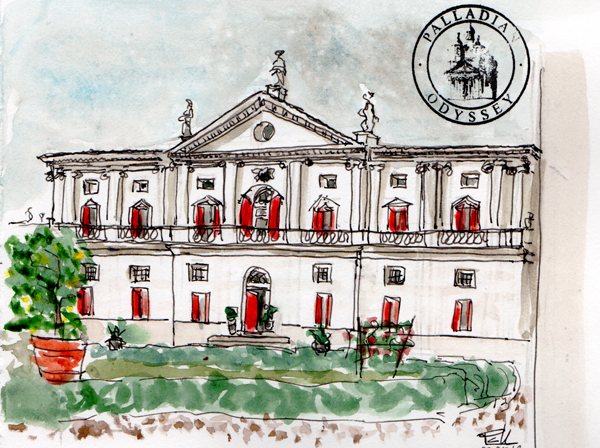 Sketching in watercolour only made me feel very uncomfortable. At the end of the first day I was too tired to sketch the Villa Cornaro, which I regret now. It was the first Palladio villa I visited. 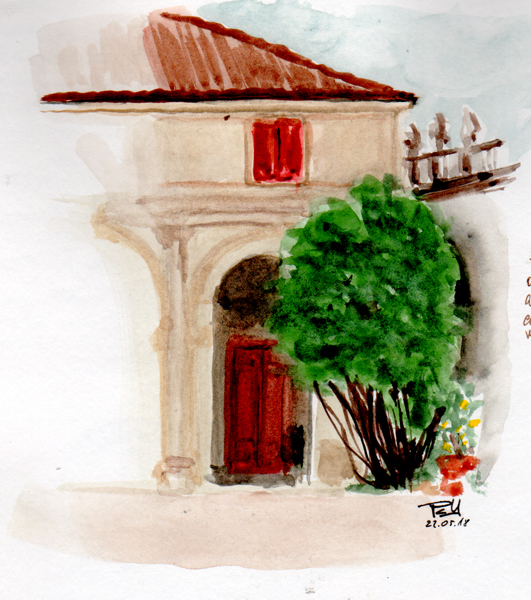 Villa Maser is very well known but not typical for Palladio. Especially the illusionistic frescos by Veronese contradict the Palladian concept. Thanks to Monica, our local guide, who was with us during the following days, my enthusiasm for Palladio was growing in a way I had never expected.

Bringing the long façade into a small sketchbook prevents one from getting lost in the details. 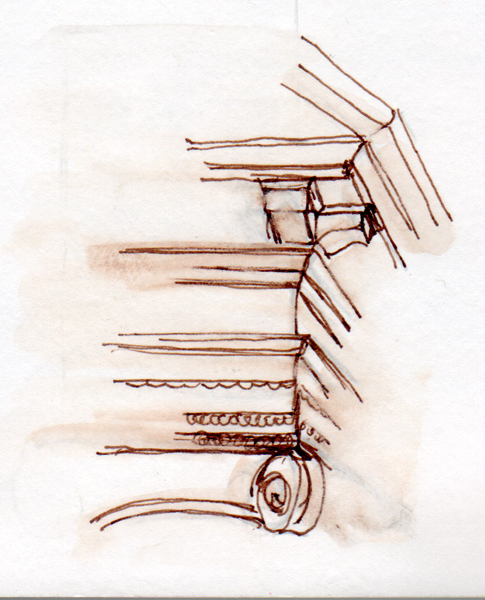 The second task was all about architectonical details. I had to concentrate not missing one. Especially for this trip I bought de Atramentis ink in brown (not an easy undertaking!). On the smooth surface of my Stilman & Birn Epsilon the ink doesn’t dry very fast so one can blur it a little bit.

After a drive through narrow winding alleys one arrives the (unfortunately not car free) centre of Asolo, a beautiful town with a stunning panorama. Here my ambition arouse and I used only brush and watercolour. The result was devastating. Even Liz’s helpful tips couldn’t save this work. 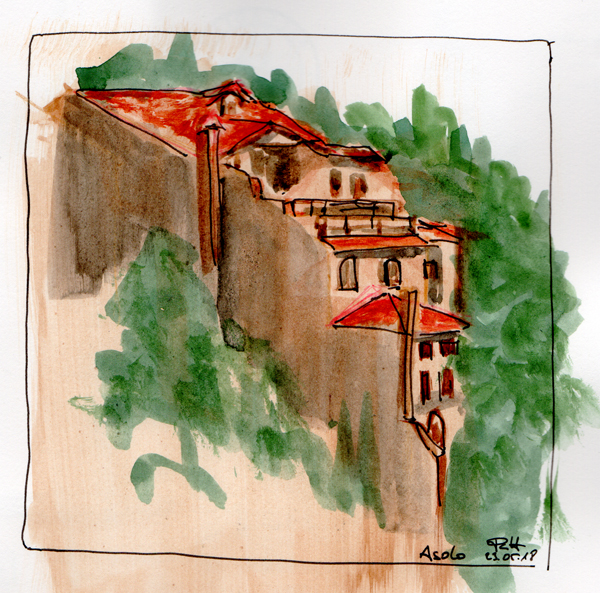 For the view on the main place I went back to my usual method: setup with watercolour pencil, lines in ink, and watercolour. This sketch made me definitely happier than the first one. 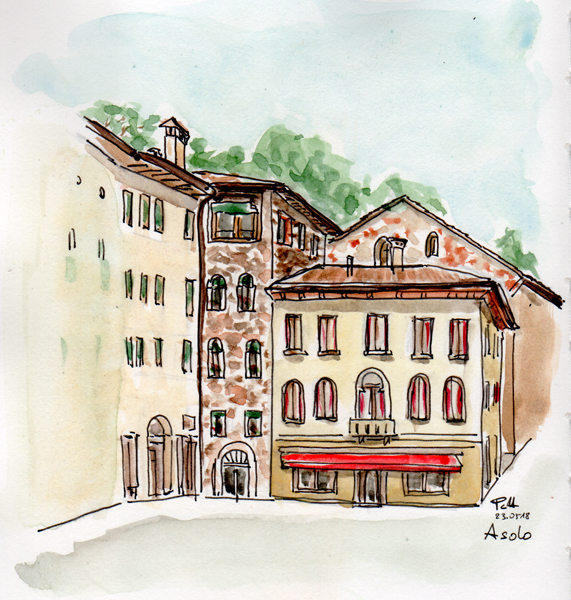 But I didn’t want to give up that easily. I used the time till dinner (which was superb by the way) to sketch the church tower in several techniques. That’s how I discovered that my squirrel hair mop brush, which I only had used until this time to paint the sky, could provide better results than my sable/nylon dagger brush. The last version of the tower was exactly that kind of sketch I initially wanted to achieve. 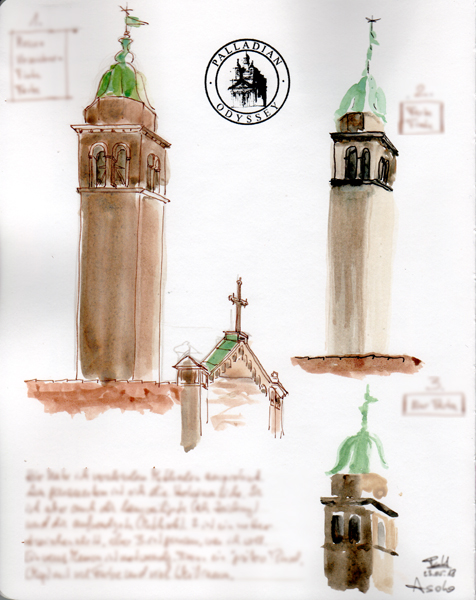 I used my newly acquired skills the next day at the Villa Emo. To emphasize the character of the sketch I used a watercolour pencil in a colour with no relation to the building at all.

This is a real Palladian villa. Here the fascination of the symmetry, the symbolism, the economy and the symbiosis between aesthetic and function revealed to me.

Bassano del Grappa is another treasure in the Veneto. The famous bridge was designed by Palladio. In the meantime it was rebuilt several times but always according to his design. When I saw a photo of it on the Palladian Odyssey’s website I was shocked: "They don’t expect me to sketch that!" (Later I found out, I wasn’t the only one having this fear.) Actually the bridge was not as complicated as the houses in the back. I barely used a setup or lines in ink for them, which made them look flat. Adding the shadows was a big improvement. I used watercolour pencils for the shutters, which made things a lot faster. The pylons of the bridge were tricky, because they are much flatter than they seem at the first look. 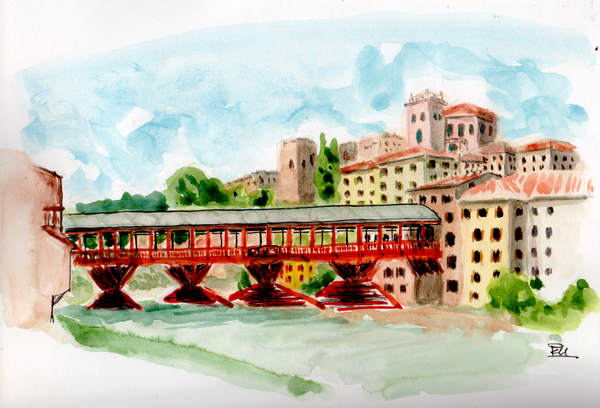 Vicenza has the highest density of Palladian buildings and is worth visiting anyway. It is a charming, placid town, which hasn’t been discovered by mass tourism until now. About two decades after the Basilica Palladio built the Loggia del Capitanio opposite it. For me this was the least appealing of his buildings. I missed the clarity I had appreciated at the Villa Emo. 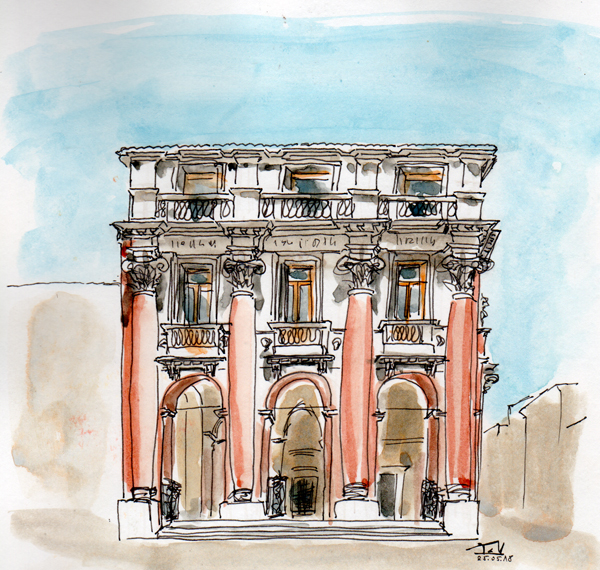 Maybe my mind was already occupied with another work by Palladio. It is obligatory for every graduated theatre scholar to visit the Teatro Olimpico. Frankly it isn’t captivating with simplicity but the perspective of the stage building is overwhelming. Even If I had have enough time to sketch it, this masterpiece is too complex to be brought on paper by me. That’s why I was satisfied to sketch only the entrance. 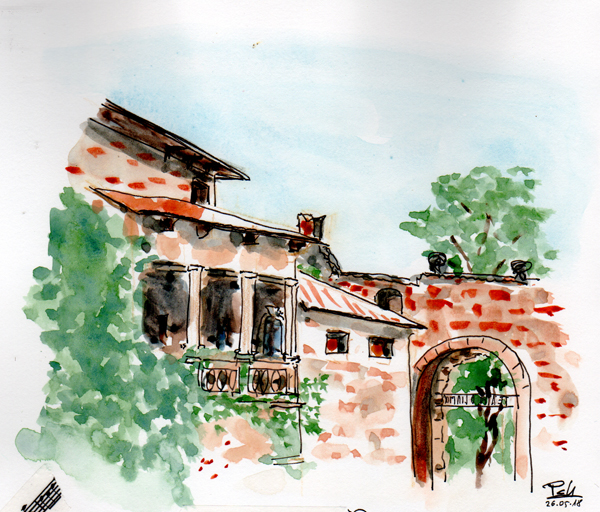 Here the magnificent Odyssey ended unfortunately. I learnt and saw a lot. Mike showed us an Italy, whose beauty I hadn’t even imagined. Liz taught us things, I had no idea one could do with a brush. 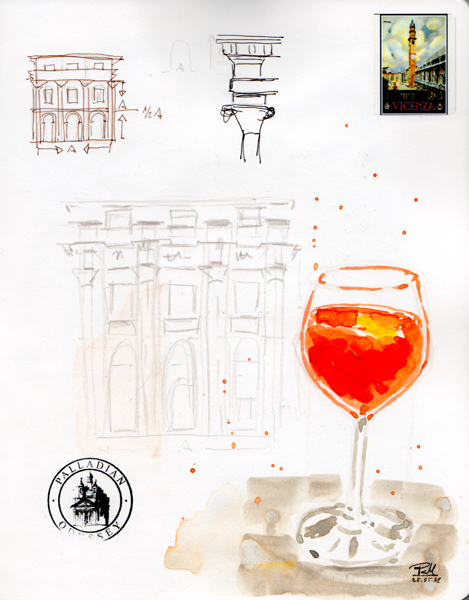 Although I am convinced everything works better with an Aperol Spritz, I was sadden by the Farewell. I would miss the sketching but in particular I would miss this incredible group. My only comfort was that my journey wasn’t going home but to Venice.