Between the 9th and the 13th century the most important centre in the north Adriatic lagoon was on Torcello. It was a see with prosperous trading houses and craftsman’s business where between 2.500 and 3.000 people lived. At the beginning of the 14th century geographical and economical transformations let the fishers move to Burano, the craftsmen to Murano and the merchants to Venice. Torcello sank into oblivion. With 0,44 square kilometres it is one of the bigger islands in the Venetian lagoon. (Strictly speaking it is an archipelago because even Torcello consists of several islands.) It reminds one of a marshland because it is situated in the so called Laguna morta, where the level of saltwater is low and one doesn’t realize the tide. The official number of present inhabitants range between 11 and 20. The main attractions are a bridge, a church and a basilica with stunning mosaics. The side attractions are another bridge, some archaeological artefacts and a small museum. During the day an elder man tortures an accordion near the vaporetto station that you thankfully don’t hear very far. There are two souvenir stalls, a small shop, which sells high-quality products from nearby Burano, and some restaurants. After one or two hours one saw everything and found also time to lunch. In the meantime many tourist come to Torcello. All guidebooks advise to visit it paradoxically because it is reputedly not overrun by tourists.

It is worth a visit for archaeologists and art historians but what does it offer to all the other people? Strange to say Torcello radiates even during the day when the tourists explore the sights a certain peace. One gets noticeable slower, more relaxed and calmer. At the early evening the basilica, the stalls, and the restaurants close. The tourists have already gone back to Venice, Punta sabbioni or on board of these horrible cruising ships. The few people, who work on the island, leave, too. (I believe I saw one or two of the between 11 and 20 inhabitants, but I am not sure.) In the magnificent light of the dusk one has Torcello (nearly) completely to oneself. From this moment on the peculiar peace has captured the whole island. The only sounds are made by birds and insects. Until the next forenoon, when everything is opened again and the tourist are arriving, a sacred tranquillity lies over Torcello.

Fortunately there exists neither a hotel nor a camping site on the island. Guestrooms can only be found in the Locanda Cipriani – a real institution. Put into operation in 1934 it has accommodated artists, politicians and queens since then. I had the same room Ernest Hemingway once used. (Instead of a TV you find good equipped bookshelves.) Many people only come to enjoy the excellent lunch at the Locanda. If you stay overnight and order a dinner it can happen that you will get a charming restaurant with friendly service completely to yourself. 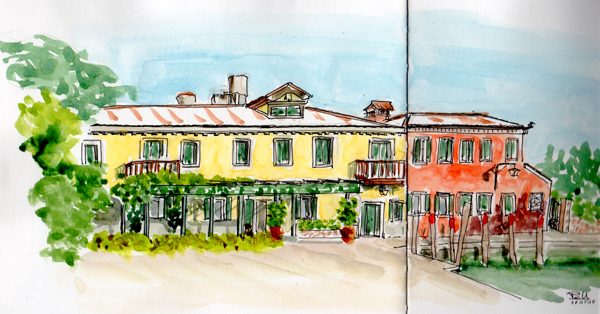 The Ponte del diavolo owes its name to a legend, which tells that the devil in form of a black cats sits on the bridge every Christmas Eve and waits for the souls of children. It is very popular among the tourists, that’s why I started early in the morning. 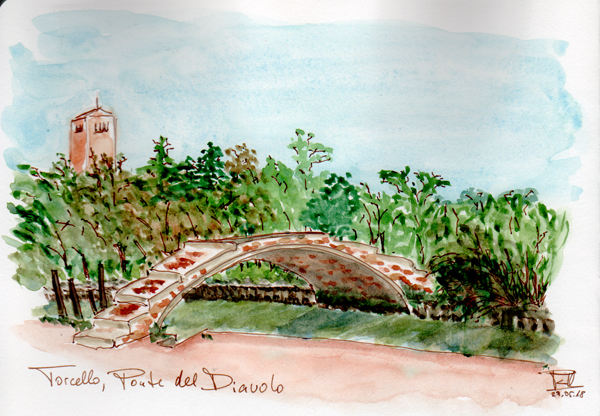 The church San Fosca dates from the 11th century. It is a worthwhile motif with all its bows and ankles. This sketch took longer than expected. At this time of the year many pupils were on excursion. Suddenly I and the sketchbook became more interesting than any historic monument. I was surrounded by lovely children who took photos of me and the sketches while I tried to answer their questions in my broken Italian. 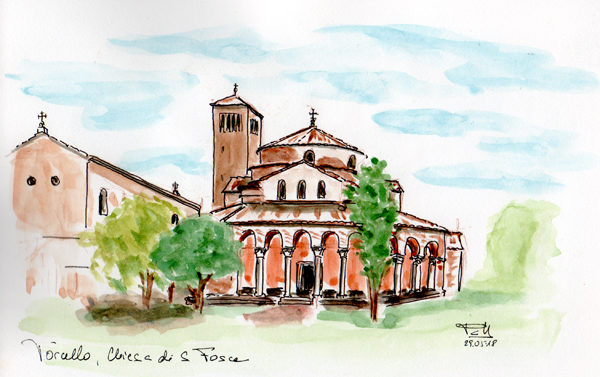 In the evening I made a second sketch in a looser style. 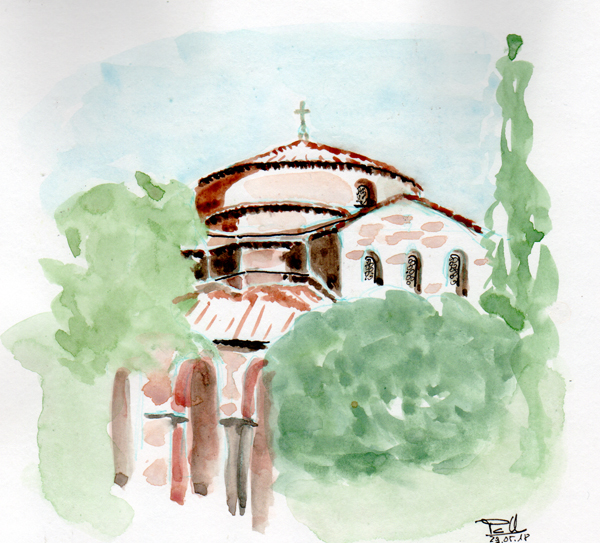 For me sketching is recreative process. On Torcello it became a deeply relaxing experience. Although there are some private houses like this, I saw and heard nothing. 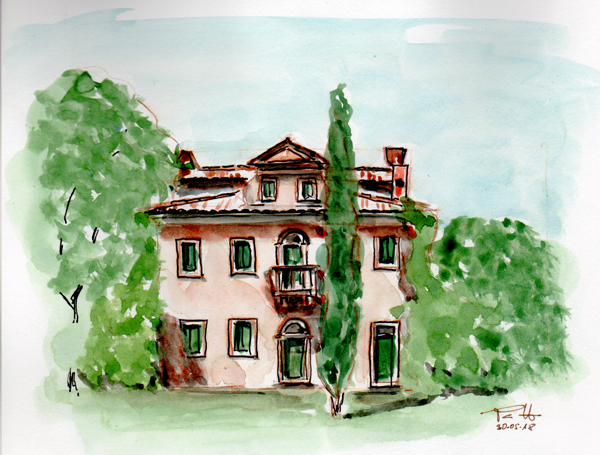 The only creatures watching me from time to time were the lizards.

This is Torcello’s second bridge, a main traffic hub that connects two islands. I didn’t want to produce again a lot of green shapes and decided to do my first black and white sketch in watercolour. I appears a little bit sad despite the full sunshine. Maybe it was my mood because I knew already that I will soon miss painfully Torcello’s sacred tranquillity.