Marseille certainly won’t win any beauty contest. It impresses more with its richness of facets. The city changes its face every few steps. Just as you are strolling along a boulevard reminiscent of Paris between Wilhelminian-style houses with artistic wrought-iron grilles, a dark alley lined with graffiti-covered façades hiding abandoned or run-down shops awaits you around the next turn. Involuntarily, you quicken your steps to leave as quickly as possible this area that you wouldn’t even want to imagine having to enter after dark, but after a few metres a friendly square opens up where people sit comfortably in café gardens. It is this constant juxtaposition of contrasts that makes Marseille so fascinating. It is always different than expected. It took me three visits to finally identify the few constants you can rely on here.

Almost every street leads up a mountain or ends at a steep staircase. Marseille is a training camp for extreme mountaineers! This city must be located in the south, because when it snows, the inhabitants would only get around with ice axes, crampons and climbing ropes. Several sights are either on a mountain slope or on a high plateau. The corresponding public transport stops have usually been built at the foot of the mountain by devious sadists. The tourist who wants to visit has to climb up and climb down again to leave. Out of sheer exhaustion, I have begun to plan my use of transport in such a way that I save myself at least one mountain trip: For example, I got there by metro and left by tram.

Marseille’s centre is still the harbour, the old harbour mind you. The one where the really big ships dock is far outside. But if you sit down at the old harbour, you’re pretty sure to see people from 5 continents passing by within a few minutes. So there’s always something going on there, and when I write "always", I mean it. Not New York, Marseille is the city that never sleeps. That’s why it’s never quiet. Yes, the traffic noise decreases as the night progresses, but it’s hardly noticeable when young people are dancing along the edge of the harbour at 3:15 in the morning to the booming roar of their sound machines. If this hadn’t happened in the immediate vicinity of my hotel, it would actually have been admirable, because not even in my younger years would I have had the energy for this kind of thing at this time of day.

If there is such a thing as traffic rules, they only serve to be ignored. No road is too narrow, no bend too tight not to be taken. The reckless manoeuvres of car drivers are joined by motorised two-wheelers, bicycles and scooters that claim the pedestrian zone as their own, with a naturalness that is threatening to pedestrians. It is really amazing that there are not at least 50 traffic casualties every morning.

None of this spoils the fascination of Marseille. Hardly any other major city offers so many opportunities to enjoy an overwhelming view. With the Palais Longchamps, probably the most magnificent water distributor in the world is located here, and from the constant climbing, the Corniche Kennedy offers unique relaxation. The (flat) road runs 3 kilometres along the coast. In addition to restaurants and seating areas, there are several access points to beaches or bays. The people of Marseille have the privilege of being taken directly to the sea for a swim by public bus. The water is too cold for me, but crystal clear. It’s a really good place to stay. The view across the middle sea shows the Frioul Islands including Île d’If.

Probably few people would visit the Château d’If if Alexandre Dumas had not created his most famous prisoner. Thankfully, those responsible have chosen not to exploit this fact as brutally as, for example, Verona did with Juliet’s balcony. Apart from a small exhibition about the Count of Monte Christo, a speciall cell was created for Edmond Dantes, including an opening to Abbé Faria’s cell. (Doubts about one’s own sanity arise when one considers that one has travelled thousands of kilometres to photograph a hole through which two fictitious figures have crawled). Otherwise, more emphasis is placed on the actual history of the prison. Although the not very large complex takes up almost the entire island, it has benches, deckchairs and even a small café so that visitors can take their time and enjoy the impressions, including the breathtaking view of Marseille.

Once again no real time for sketching. Just one very quick (who left earlier, the sun or me!) sketch of the Opéra municipal turned out. 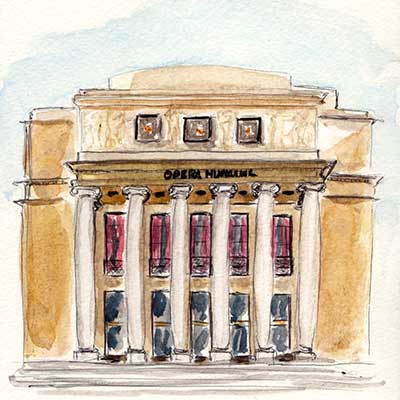 I chose this building because I would never have come to Marseille without the opera. In the meantime, I’ve become a fan of the house. The orchestra is brilliant, the chorus sensational and the soloists consistently excellent – most of the time, anyway. After fantastic I puritani three years ago and two highly successful performances of Don Carlo in June, I was now in Macbeth – or so I think. In some parts I wasn’t sure. Probably it’s not quite such a good sign for the overall impression of a performance of this opera to answer how one liked it with: "Banquo, Macduff and the chorus were great." Nevertheless, I am thinking about going to see Les Huguenots next year …