Last weekend was very relaxing. I was listening to my Opera collection – something I have not done for a long time. And I was playing with my watercolours – something I normally find rather boring but this time I was so thrilled, I did not want to stop.

Excursus: The colour is in the pigments

It is not the name but the pigments that matters concerning colours, viz. a colour with the same name can be different if you buy if from another manufacturer whichever pigments were used. Take for example Payne’s Grey. Named after painter William Payne it originally was a mixture of Iron Blue, Yellow Ochre and Crimson Lake. This would correspond with the pigments PB27, PY43 and PR23. Depending on the manufacturer the mixture today looks like that.

I will stop her. If you want to go further into details consult one of the following website.

An important note for everyone who relies more on regulations and warnings than on common sense. Watercolours contain chemical substances. In significant quantities they are – what a surprise – not very healthy. So please, do no suck the colours 😉

Back to my palette

When I started urban sketching I orientated my palette on the recommendations Liz Steel gave for her Watercolour course. That worked very well but I thought it was time for a change.  If not noted otherwise I use colours in tubes by Daniel Smith. 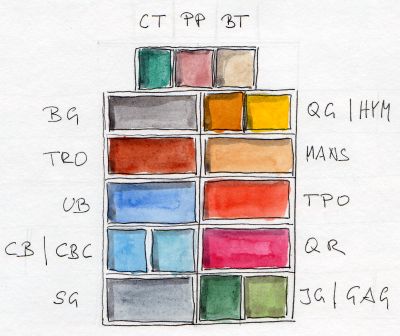 The first row is my Special Effects Department. It contains colours I do not use often but specifically.

BT – Buff Titanium (PW 6:1)
It is a Creme White that is good for mixing as long as one pays attention because it is rather opaque. I like it for facades.

PP – Potter’s Pink (PR233) by Winsor & Newton
I have to admit this is one of ugliest colours I have ever seen. In mixing it works wonders creating marvellous variations with a superb granulation. Liz Steel published recently a post about Potter’s Pink.

CT – Cobalt Turquoise (PB36)
Until recently I did not possess a Turquoise at all. You do not get many opportunities to sketch the sea or a mountain lake in Vienna and I could not imagine another use for this colour. On the other side I have been searching a hue that corresponds with the colour of copper roofs. Thank’s to Jane Blundell the solution is Cobalt Turquoise with a little bit of Yellow. Then I discovered some other nice combinations. Cobalt Turquoise and Potter’s Pink make a beautiful Grey that reminds me of a thunderstorm in summer.

Now we go from right to left, up to down and bright to dark.

QG – Quinacridon Gold (PO48, PY150)
Some years ago Daniel Smith replaced the original pigment PO49 with a combination of PO48 and PY150. According to the Internet the world of colour has not been the same since. I cannot judge it I have never known the old version. The new one I use for gold on bigger scales (You can read more about using gold and silver in urban sketching here.) and mixing.

MANS – Monte Amiata Natural Siena (PBr7)
I use this colour only for mixing and I fancy replacing it with Quinacridon Gold because I do not see a big difference in the mixes.

GAG – Green Apatite Genuine (PT)
Now it is getting exciting. Daniel Smith produces with PrimaTek genuine mineral colours. As the name implies they are made of ground minerals. My interest in colours flourished as recently as I use PrimaTeks. They have a sensational granulation bringing the colour alive and they keep this quality in the mixes. Ea, they are expensive but they are worth it.
With the right hues of Blue and Yellow you can mix a lot Greens. I discovered during the last year that I use a lot of Green. Lazy as I am I became annoyed by mixing it again and again. Jane Bludell’s post could convince me to buy the most necessary Greens. The warm Green Apatite Genuine and the cooler counterpart.

SG – Sodalite Genuine (PT)
I belive it was Paul Wang who mentioned this colour for the first time. As with the Greens I bought it because of my laziness. Colours in tubes can be premixes. I did this with two Greys. It never worked for me. After I nearly finished them I was looking for a “shadow colour”. Sodalite is very appropriate and becomes very dark if it is mixes with a brown hue.

CBC – Cerulean Blue Chrom (PB36)
Another proof of my laziness but truthfully who wants to mix a Sky Blue? I do not, that’s why I bought one.

CB – Cobalt Blue (PB28)
No idea, why I bought this colour. Nevertheless it turns out I prefer it to Ultramarine Blue.

UB – Ultramarine Blue (PB29)
For me this is such a loud colour that I only use it for mixing. I will try to replace it with Cobalt Blue.

BG – Bloodstone Genuine (PT)
I was the victim of a False Friend. In German "Blutstein" (= Bloodstone) is another name for the Hematite. A fantastic mineral of which I expected a violet hue like Caput mortuum. I was astonished when I looked at the colour for the first time. A little research told me that in English a "Bloodstone" is a Heliotrope. Now I have a granulating dark Brown, with which I replaced Van Dyke Brown, viz. mixing it with a blue hue results in many variations from Grey to Black. 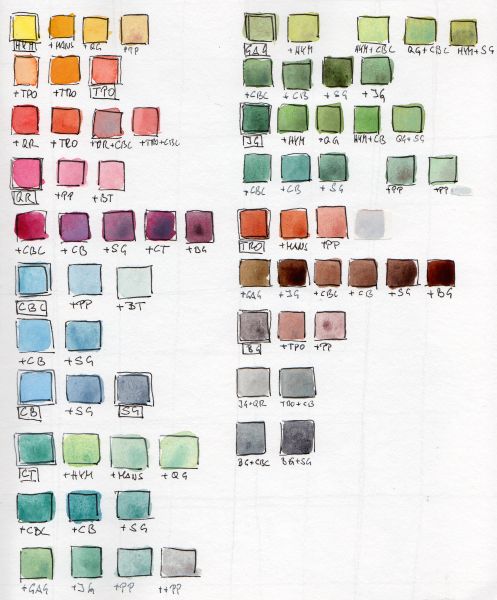 After I took a closer look at my new palette I discovered I have a luxury problem. Replacing Ultramarine Blue with Cobalt Blue gives a me room for another colour. Which colour would you recommend?